While the majority of people deem to climb the highest mountain in the world, others just want a much calmer and subtle experience. That’s when the Lobuche and the Island peak come into the picture. These peak climbs are two of the most famous peak climbing destinations in the Khumbu region due to its moderate difficulty and incredible views.

Island peak, or also known as ‘Imja Tse’ perches above the settlement of Chukkung Village. The mountain achieved the name ‘Island Peak’ due to its unique architecture which looks like an island in a sea of ice when observed from Dingboche. Also, the mountain is very well-known due to the fact that Sir Edmund Hillary and Tenzin Norgay summited it before their actual expedition to Everest.

On the other hand, the Lobuche peak is an extension of the gigantic Mount Everest. Lobuche primarily has two faces, east, and west. When we attempt to summit the Lobuche peak, we generally attempt it from the east face, thus gaining the name Lobuche East. Unlike the Island peak, Lobuche sees a lesser number of summits with only a handful of enthusiastic climbers opting for it.

Although lying in the common region, both the peaks have contrasting features. A lot of factors, including their geographic location, difficulty, and altitude separate them. However, the one thing common between these two peaks are the unforgettable views they will bless you with!

So, If you’re looking forward to peak climbing in Nepal but in a dilemma choosing between these two, read on this article to find out the variation between the climbs and choose the one which is the right fit for you!

Let’s dive into it. 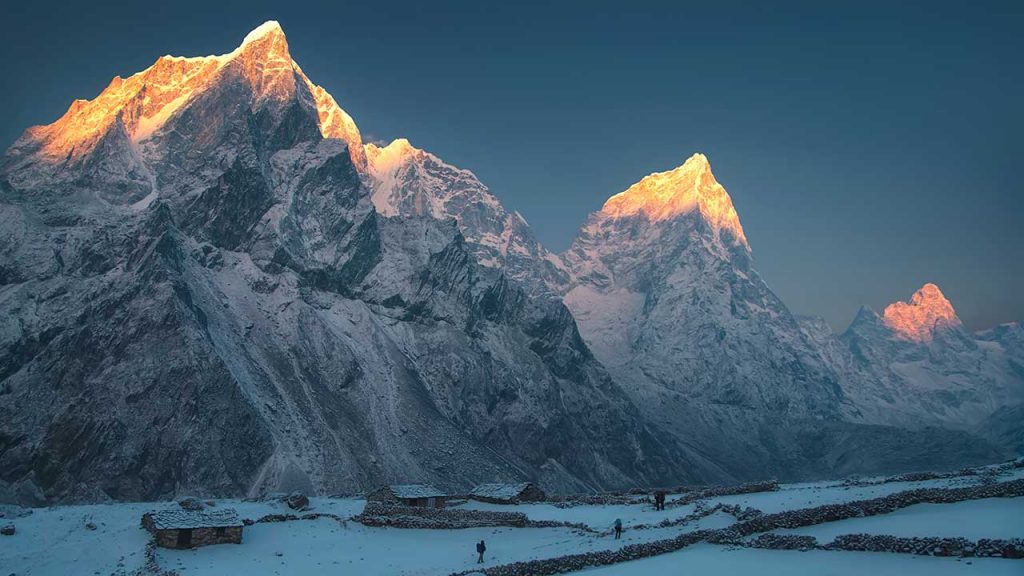 Lobuche East lies 150kms east from Kathmandu and approximately 8.5 km southwest of the popular Everest Base Camp. It lies near the foot of the Khumbu glacier and is an extension of the Everest massif. The Lobuche has many faces comprising of Lobuche East, Lobuche West, Lobuche Far West and Lobuche Kang (Tibet). We usually summit the Lobuche peak from the east face. 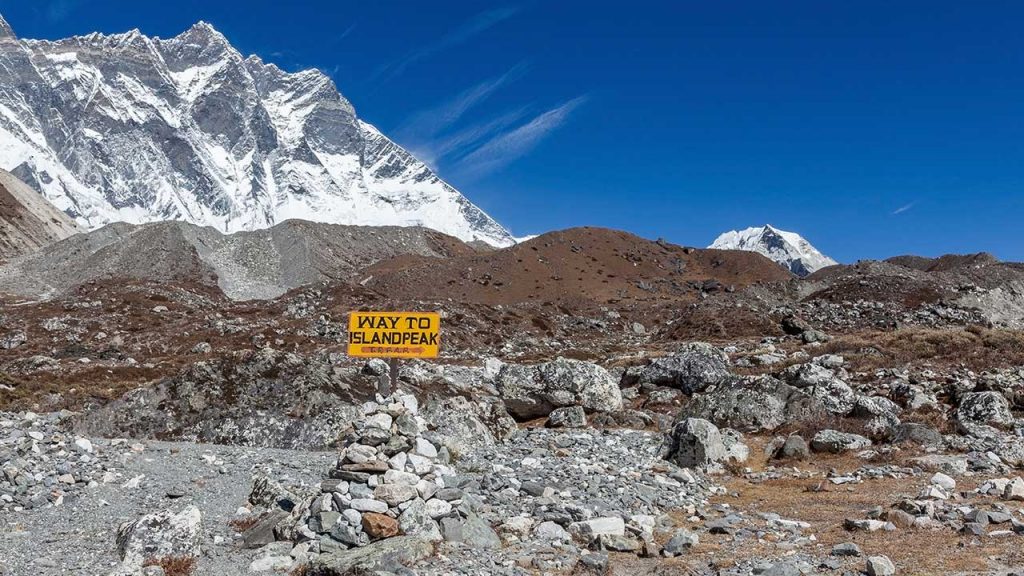 Island Peak, or referred to as “Imja Tse” is an extension of a ridge coming down off the south end of Lhotse Shar. It lies in the Sagarmatha National Park of the Khumbu region in Nepal. The peak lies in the centre of the Chukkung Valley, perched as an island among the sea of ice, gaining the name “Island Peak”. The Island Peak has a magnificent west glaciated face that ascents from the Lhotse Glacier.

Lobuche East sits at an altitude of 6,119m and is a trekking peak, not an expedition. En route to the Lobuche peak, you will pass two significant camps. These are the Lobuche Base Camp, and the Lobuche High Camp which stands at 4,950m and 5,400m respectively. The lowest point before the summit is the Lobuche village which sits at an elevation of 4,930m.

Island peak stands 6,189m tall and is also considered a trekking peak. The base camp sits at an altitude of 5087m, and the Chukkung valley sits at 4,730m between the Lobuche East peak and the Island peak.

The trekking route leading to both the peaks are similar. We start from Lukla passing through the settlements of Phakding, Namche Bazaar, Synagboche, Tengboche to Dingboche. From Dingboche, trekking eastwards leads us to Chukkung and the Island base camp. Whereas, travelling west leads us to the settlement of Lobuche and eventually onto the Lobuche Base Camp. 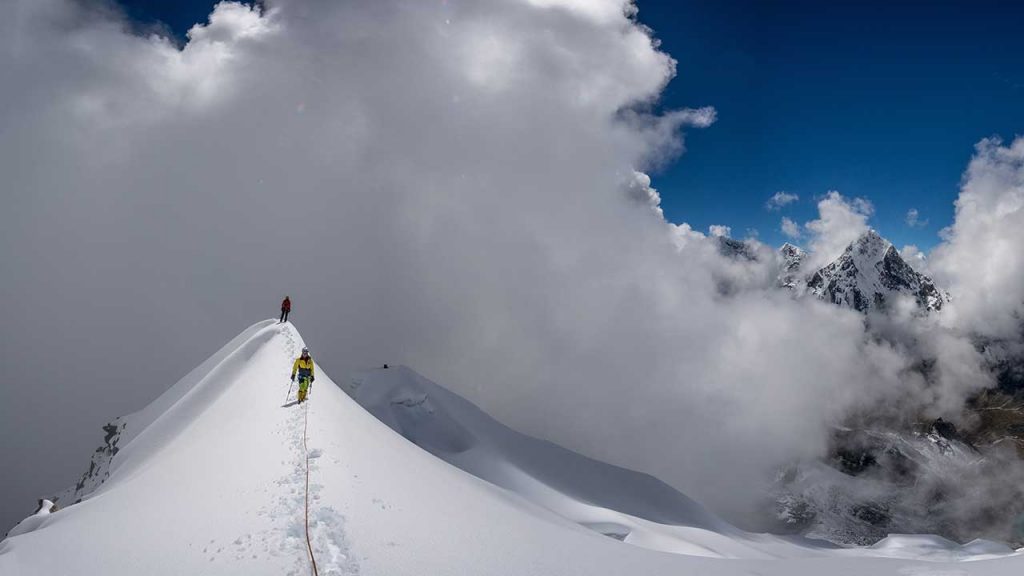 The journey commences from the base camp as you gradually ascend towards the high camp for the day. The paths are usually rocky moraines with a moderate incline angle. You will not require to use mountaineering equipment up to the high camp. After reaching the high camp, the guides will fix the necessary ropes for the main ascent to the summit of Lobuche East.

The main climb features many technical difficulties and requires extreme physical endurance and push. The trail at the final stages typically require crampons, ice axes and ropes as it has a steep 45-degree angle of climb. The peak also features a false summit southeast of the true peak. The actual peak is another couple hours of ascent along the ridge heading north-west. From the top, the fantastic views of Lhotse, Nuptse and Ama Dablam welcome you! 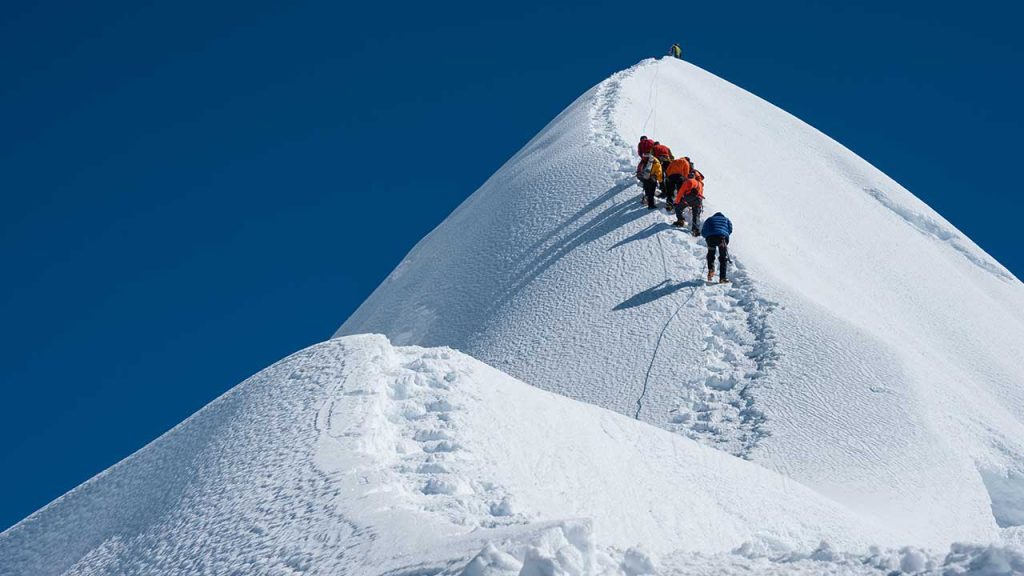 The climb to Island Peak commences from the base camp at 5,087 meters called Pareshaya Gyab. The climbers start the summit, early in the morning around 2-3 am. The destination for the day will be the High Camp at around 5,600m. The climb from base camp to the high camp is simply a hike. However, above high camp, some rough advances require moderate scrambling and a steep ascent through an expansive open gorge.

After reaching the gorge, we then start walking along the glacier and proceed towards the steep icy slope. Using the fixed ropes, we start the strenuous climb of almost 100 meters to the summit edge. Upon reaching the top, the view will comprise of the enormous mass of Lhotse, transcending 2,300m over the summit!

Since both of them are peak climbs, they are quite challenging and definitely not for the newbies. These climbs require extensive knowledge of mountaineering equipment. In the subject of comparing these two peaks, the Island peak is more comfortable and simpler than the Lobuche East. Lobuche East is technically a more challenging climb due to its high degree of climbing angle and unpredictable weather.

The Lobuche East is one of the most challenging and technical peaks climbs in the Khumbu region. The climb features a steep 45-degree climb as well as steep climbs and descents.

For the Lobuche East climb, you will require detailed knowledge of using mountaineering items such as ice axes and crampons.

Furthermore, you also need to know how to use descenders on fixed lines and using carabiners and ropes to ascend through steep climbs. The climbs usually include walking through steep slopy and icy paths. The slippery, icy rock slabs also carry the risk of slipping while ascending. So, if you’re planning to opt for this climb, be sure to develop advanced rock climbing skills for more efficiency. 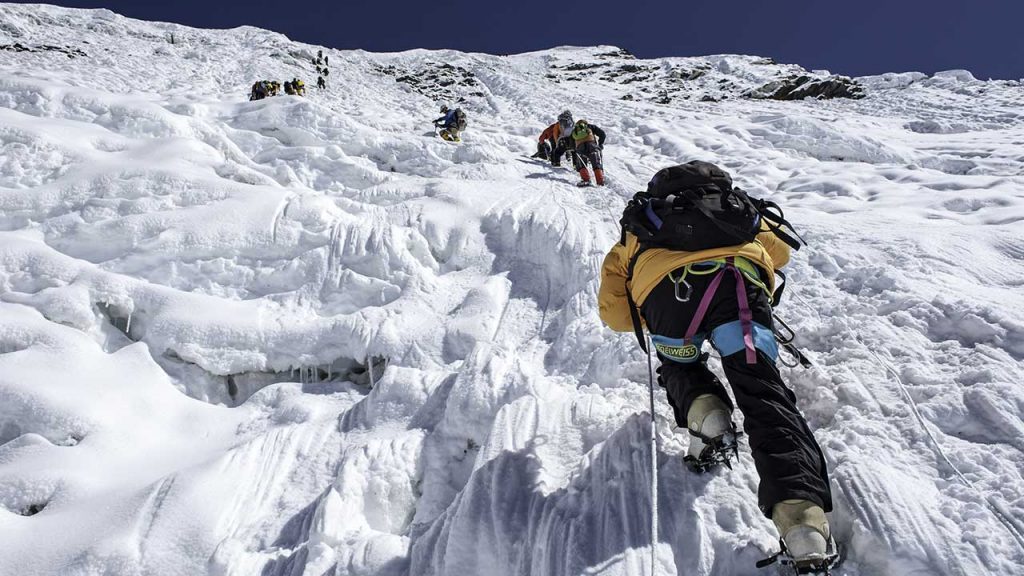 The Island peak is a comparatively more straightforward climb compared to the Lobuche Peak but still demands extreme physical endurance and strength. The path often contrasts of easy and steep climbs. Occasionally you will stumble upon tracks throughout the rise which are technically challenging.

The trail takes you through many crevasses and rocky boulders. As a result, you will need a good knowledge of using crampons, ice-axes and ropes to battle them. As you near the summit, the climb gets very challenging with a steep ascent, so you need that extra push that will help you to overcome the barriers!

For the Lobuche East Peak, you get accommodations all the way up to the Lobuche village. Hence, you will not have to set up tents anywhere except for the base camp and the high camp. The accommodations are pretty basic, though, with double sharing rooms and a shared bathroom.

Unlike the Lobuche East peak, the Island peak only has settlements up to the Chommrong village. After that, you will need to sleep in camps set up by the trekking team in the area surrounded by ice. The place also seems quite isolated due to the lack of settlements around the icy borders.

For the Lobuche East Peak, the cost builds up around to around $2160. This includes the fee of your guides, permits, porters, accommodations and all mountaineering pieces of equipment.

The cost for the Island peaks comes around $2200. This includes the fee of the guides, permits, porters, accommodations and all mountaineering pieces of equipment.

Highlights of Both the Lobuche and Island Peak Climbing

Both the Lobuche and Island Peak are strenuous climbs and under no circumstances should you take them lightly! These climbs require several hours of daily walking, excluding the summit days.

For the climbs, previous experience of peak climbing is not mandatory but is quite beneficial if you happen to have it. Also, you need to have a detailed knowledge of the mountaineering equipment such as ice-axes, crampons, carabiners and ropes.

Above all, if you have certain health conditions or under medications, then it is better to consult a physician before you opt for a trek. High altitudes can invite many complications which might not be suitable for specific health conditions. 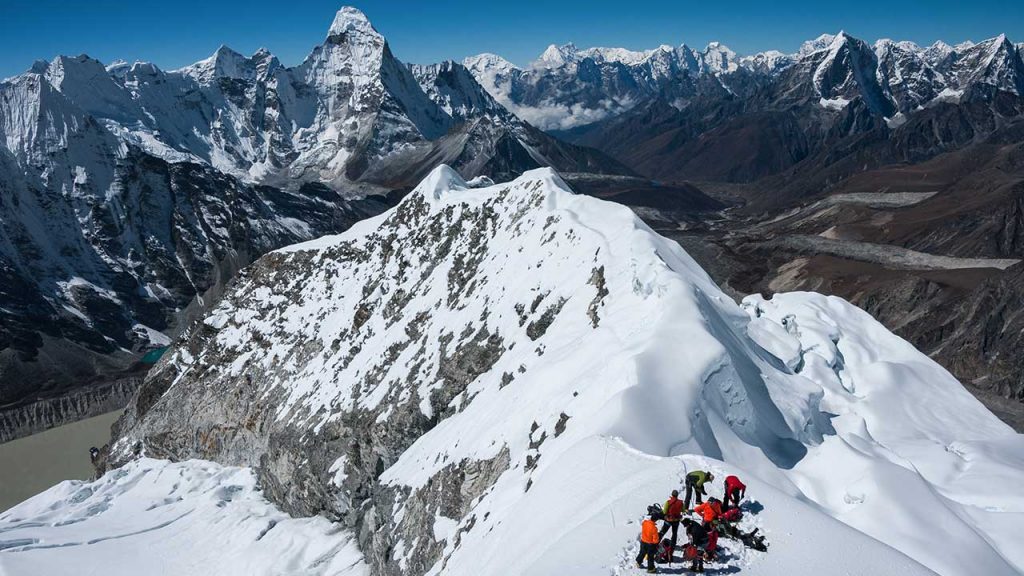 Risks associated with the Lobuche and Island Peak Climbs

Since both the treks are high-altitude climbs, there is a possible chance of altitude sickness. Altitude-sickness is a real threat at these altitudes and can cause life-threatening complications if not treated appropriately. Therefore, the best thing to do is to ascend slowly and to acclimatize properly. Also, if you feel certain signs of altitude sickness, do not hesitate to inform your guide. With proper acclimatization, you can reduce your chances of falling prey to altitude sickness.

The weather in the mountains is generally unpredictable and can change from good to worse in the blink of an eye. Heavy winds, snow-fall or avalanches can occur due to the deteriorating weather which can pose a real threat while you are climbing. So, always be sure to check on the weather conditions before opting the climb.

Crevasses are giant cracks which appear in the glacial ice that can swallow down passing climbers. Although the Lobuche and Island peaks are not as risky as the other significant mountains, there is a slight chance of it occurring. Hence, it is best not to spend too much time on the glacial paths and move as quickly as possible.

Falls are also another dangerous part of peak climbing. It usually occurs due to fatigue or carelessness. So during the climb, it is always essential to ascend correctly and use the ropes and carabiners as instructed by the guides. 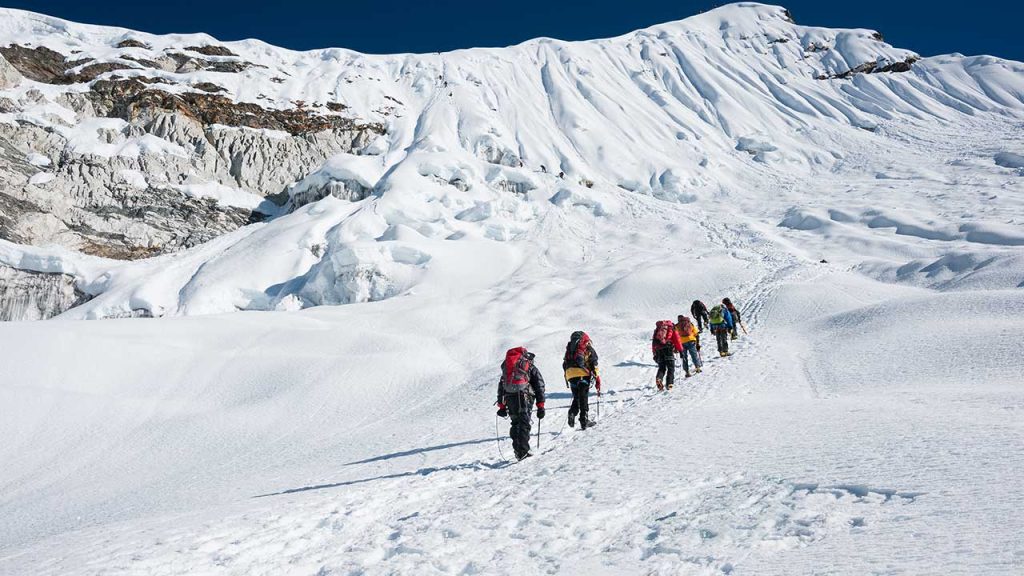 Since the mountains have an ever changing and unpredictable weather, it is best to travel during the favourable seasons to reduce any potential risks. The best time to opt for the climbs are the Spring season (March to May) and the Autumn season (September to November).

During these times, the weather is a lot better, and the winds are lesser, which makes it an ideal time for summits. While some people also opt for winter climbing, the freezing temperatures often can prove burdensome. Thus winter climbing is only recommended for experienced climbers!

Some Tips For the Lobuche and Island Peak Climbing

Despite some obstacles, both the Lobuche and the Island Peak are fantastic peak climbs in the Khumbu region of Nepal. For hardcore thrill-seekers, they can provide some memorable experiences and unforgettable memories. While the Lobuche peak is technically a more challenging climb than island peak, both of them promise rewarding views and the ultimate mountaineering experience for adventure-seekers. 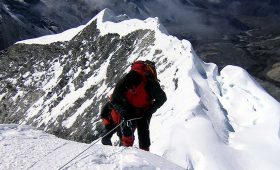 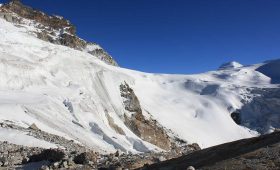 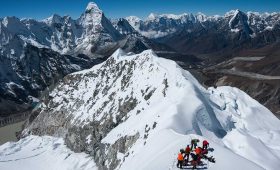